L’UNION PUBLICATIONS, INC. is proud to announce that Saera Jin, a member of our video production department, has won the Directors Award at the 8th ZAGREB TOURFILM FESTIVAL for the video “Strolling Through Tokyo: Where Ancient and Modern Meet,” which promotes tourism in Tokyo.

More than 300 works from 41 countries were submitted for the 8th ZAGREB TOURFILM FESTIVAL this time. Saera Jin, a member of our video production department, won the Directors Award for the Tokyo tourism PR video “Strolling Through Tokyo: Where Ancient and Modern Meet,” making her the first Japanese female director to win this award.

The award-winning video, “Strolling Through Tokyo: Where Ancient and Modern Meet,” is designed to promote the attractions of Tokyo to China. It was produced by L’UNION PUBLICATIONS, INC. for the joint promotion “Tokyo Tokyo Old meets New” campaign with The Asahi Shimbun Company, Tokyo, and the Tokyo Convention & Visitors Bureau, which handles Tokyo tourism PR. The work features the female entertainer, Ron Monroe, who is well known both in China and Japan. It received a total of over 2.8 million views in the first month after being released on Chinese SNS and video sites.

The award ceremony was held on Friday, October 11, 2019 at the five-star Esplanade Zagreb Hotel in Zagreb, the capital of Croatia, with 150 guests from around the world.
Ambassador extraordinary and plenipotentiary Misako Kaji of the Embassy of Japan in Croatia attended to celebrate Saera Jin winning this award. 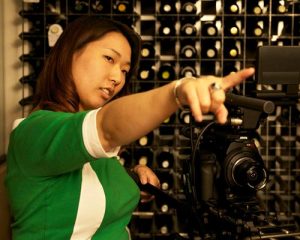 Saera Jin
Born in Tokyo. Moved to England in her teens and majored in fashion photography at the University of the Arts London.
After working for fashion magazines including Vogue and Marie Claire from Tokyo and London, she moved on to video production.
She studied film production at the Raindance film school and Brunel University Graduate School in England.
Saera Jin’s short films were listed at the Short Film Corner of the 2013 and 2014 Cannes International Film Festivals. Nominated for Best Comedy at the ASFF Short Film Festival in England.

For requests about filming and production, please contact at the following.

At L’union Publications, our portfolio includes video production for a major transportation system for visitors from overseas, production for a major retailer, and more in addition to tourism promotion videos for the Tokyo Metropolis. Our work is not limited to the Japanese language. We produce video in English, Chinese, and other languages, and we also produce websites.